It is with much sadness that I report the passing of Timely artist Marion T. Sitton on Saturday, December 29, 2012, at the age of 92. Marion passed away peacefully of heart failure at St. Luke's Episcopal Hospital in Houston, Texas, as reported to me by his niece Joy Sitton Heynen.


As readers of this blog know, when I started up in December of 2010 I devoted the first 7 posts to Marion and his career, starting with my interview with Marion that was originally published in the #78, June 2008 issue of Roy Thomas' ALTER EGO Magazine (he absolutely loved how that issue turned out), and followed by his career as a comic book and comic strip artist, his development as the world's greatest crayon artist, and ending with an entry on commissions Marion did for me over the years. Everything anyone would want to know about Marion and his career is here below. Click on any of the links to take you there:

In addition, in a subsequent blog post on the Timely romance work of artist Bill Everett, one particular story in the scarce Girl Comics #3 (Apr/50) that featured attributes of Everett's work, possessed pencils that struck me as problematic. Feeling less and less confident that this was all Bill Everett I was seeing, something about the poses looked awfully familiar to me. Sending the story to Marion, he tentatively confirmed to me that he believed he likely penciled it. Scroll about 45% of the way down here:


"Michael, I looked at the story that you sent in Girl Comics #3 that Bill Everett worked on and I'm pretty sure that I may have done the penciling on this one. The figures, the actions and the composition of the panels (always full), was the way I worked. Overall, it looks like my penciling. You have a sharp eye!"

But one thing I left out in all those posts was the fact that Marion and I became very close friends over the years. I first contacted him back in 1998, on a tip from my friend Don Mangus. Prior to conducting a formal interview in January of 2004, now 9 years ago, we would talk every few months on schedule. Marion had a wonderful Texas twang to his voice and left messages on my answering machine at regular intervals. He wanted to know about my family, my children (who he'd seen grow up by virtue of my yearly Christmas card photo) and even my dog. He always would ask about my dog Cindy who he'd seen in those Christmas photos since she was a pup.  And I wanted to know about his life, his career, and what he was presently doing.

Marion did not have a computer at that time and frequently would write me pages and pages of pencil-written letters on yellow legal paper, perfectly printed in capital letters and in a font that would make Artie Simek proud! This was a man who could letter!


Sometimes the letters would arrive on his custom letterhead:

The longest letter was a hand-written 7 page autobiography he sent me as a preface and as background prior to his interview.

Page 4, 5 and 6 cover his recollections of his debut at Timely in the Empire State Building in 1948:

His big project at the time of our initial contact was trying to get his crayon art how-to book off the ground. 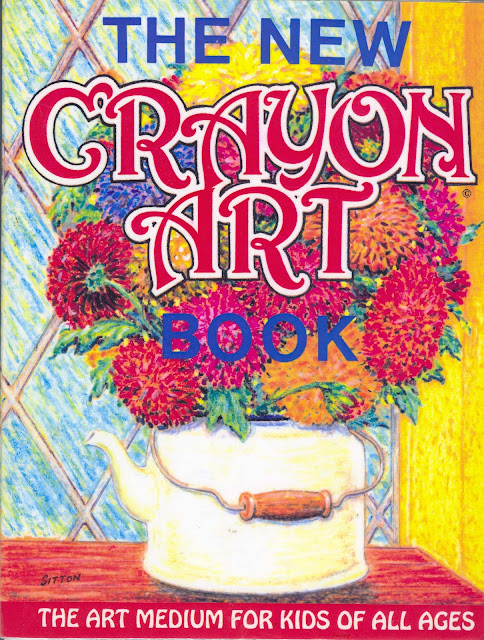 The book was written and illustrated by Marion and he sent me the mock-up to see. In those sort of "pre-internet" years (well, early internet, anyway) I made a series of phone calls to various publishers here in New York but got nowhere. The book, I would believe, is still available for possible publication.

Marion enjoyed the fact that I was keenly interested in his comic book career. As time went on, in addition to his printed interview, I was able to give him a bit of due in print and he was very prideful of his old work. Back in 2006 or 2007, I was contacted by the senior designer at DK Publishing about helping on a project that eventually became The Marvel Chronicle, a massive slipcased oversized hardcover book that chronicled year-by-year the history of Marvel Comics from 1939 onward.


I provided about 100 images pertaining to the 1950's for the book. On page 56-57, the designer opens up a double-page montage of approximately 15 page one splashes depicting all the genres Atlas was publishing in the early 1950's. Under a heading "Every Style, Every Subject", images included Basil Wolverton, Paul Reinman, Al Hartley, Dick Ayers, Bill Everett, Joe Sinnott, George Klein, Gene Colan ...  and smack in the the middle of the page, Marion Sitton, drawing a western story titled "The Ringo Kid".

Immediately I called Marion up on the phone and told him his Ringo Kid story splash was front and center on page 57 in a new book about the history of Marvel Comics, and he rushed out excitedly to get the book, extremely happy to see his signature easily read on the splash. To someone out of the comic book loop going on 50 years and thought totally forgotten, this was very exciting for him.

As we discussed the merits of the book on the phone, Marion suggested to me that I should write my own book about the history of Marvel Comics, a notion I thought unlikely as I didn't have the time, nor perhaps the patience to do such a thing. The irony of that discussion is that barely four years later, Blake Bell and I have our own Marvel history book nearly completed (as of this writing) and Marion was excitedly looking forward to the book's publication, having pre-ordered it off Amazon.com a year ago and asking about its progress every time we spoke.

Right after The Marvel Chronicle's publication, Marion told me he had given my phone number to a reporter of the Houston Chronicle, a woman named Rosanna Ruiz, who wanted to do a feature story on Marion for the newspaper. Miss Ruiz called me up one evening and I spoke to her at length about Marion, Timely and comic book history in general. The feature appeared in the August 5, 2008 edition and included two nice photos.

The online version is still up I see: 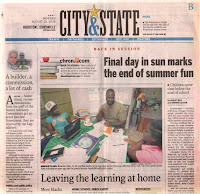 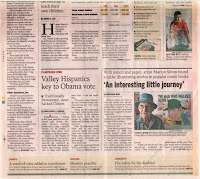 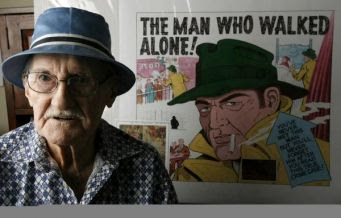 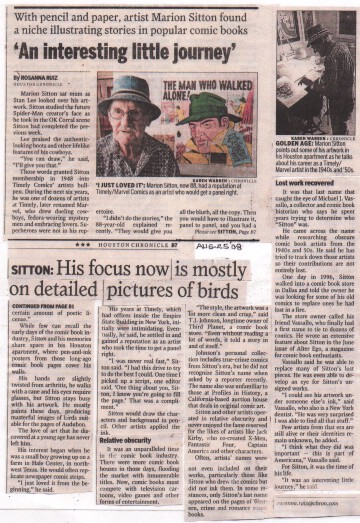 As the years went on, Marion really began to get the urge to draw comics again. He had done several recreation commissions of his own splash pages for me earlier in the decade and following a  "five minutes later" commission for an art collector friend Michael Finn, I commissioned Marion to recreate several of my favorite Atlas and non-Atlas 1950's comic book covers in a style as if he was inking the original pencil artist. These turned out wonderfully and can be seen here:

You may note that at the end of the post I mysteriously write "To be continued...". The reason is that for the last 4 years I had been keeping Marion gainfully employed and doing what he loved best. Creating art. He began a series of cover recreations that went beyond the handful of Atlas genre covers and into the realm of vintage, iconic covers of both the gold and silver ages. What follows is the four-year result of his efforts, results which just blew me away as they were done between the ages of 89 and 92. They are Marion's final artistic statements after a lifetime devoted to comic books, comic strips, commercial art and crayon art, showing that he was at the top of his game until the very end.

My biggest regret? That I was never able to find the time to fly to Houston, Texas and visit with Marion in person. It was always something I wanted to do and kept putting off, stupidly thinking there would always be time for it. There wasn't.

The images below are taken with a camera so my apologies for a bit of contrast and centering problems. The style I wanted was the same as he used in the previous Atlas era commissions, that he would interpret the covers as if he was assigned the ink job over whoever was penciling. In the Atlas and 1950's covers that meant as if he was "inking" Joe Maneely, Don Heck and Bernard Baily. In the 1960's, this would be as if he was "inking" Jack Kirby. The results varied. Some looked extremely close to the originals and some had Marion's own style coming through very strongly, especially in the "faces" of individuals, where Marion was very distinctive. I ended up loving both types of results. Heck, I would have loved them if they were done with crayon!  Hmm.. Now "there" was a missed opportunity. The World's Greatest Crayon Artist interpreting a cover in his own inimitable crayon style!

I started out in 2009 with Marvel's most iconic image:

Seeing how absolutely stunning this was really got me going. I decided right there and then to make the rounds across the Marvel founding titles:


I then began to consider other iconic covers in the earliest silver-age Marvel pantheon. I began with what is possibly my favorite cover of all time:

This was followed by other early gems:

And then back to the Fantastic Four:


Next is a cover that is a bit later than I really was shooting for but had to have done:

We then stepped back and revisited earlier times, first a visit to pre-code horror greatness with Marion channeling his inner Lee Elias. There is one tiny error in his lettering under the bottom border. The year is 1954, not 1948.


We then stepped back into the earliest Timely era with what is most certainly Timely's most iconic cover by Simon & Kirby...


...followed by "the" most iconic cover of them all, after Joe Shuster:


In the spring of 2012 Marion recreated his very last cover. Keeping to golden-age Timely, at the age of 92 Marion finished this up in May.


Marion's health into his 90's was generally very good but he was hospitalized for various minor reasons over the last few years, always letting me know when he was out and how he was feeling. I last heard from Marion on November 5th. He wrote me an e-mail, checking up on me after Hurricane Sandy after having heard how the New York City area was hit very hard. Marion's e-mails were like his printed letters, all capitals! I assured him things were fine here, other than a 5 day power outage. He passed away peacefully on December 29th having lived a good long life and surrounded by beloved family and friends. I will miss him a great deal.

Hopefully, I've helped the world know, just a little bit, who he was and what he did. 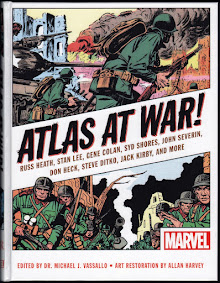 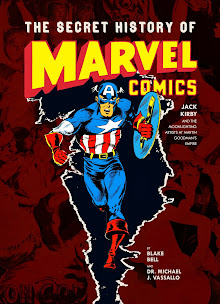 If you enjoy this blog, you'll LOVE my two books, ATLAS AT WAR, published by Dead Reckoning and THE SECRET HISTORY OF MARVEL COMICS, co-written with Blake Bell and published by Fantagraphics Books. Click on either image to order!